2020/07/28 · The COVID-19 pandemic has awoken a sense of urgency and concern in the dental world. Dental practices and schools are changing the way they operate by enhancing their cross-contamination response. Many dental equipment manufacturers are moving to provide their customers with effective solutions to assist them respond to this new normal. One of those solutions has been to reduce the propagation of aerosols during dental procedures. Consideration of contamination from retraction and suck back into the handpiece lines has also been a topic of heightened interest. Australasian Dentist speaks to J Morita Manufacturing Corporation engineer, Mr David Sleeman to seek clarification on the difference between anti-retraction and Zero-Drawback

Retraction versus drawback. What is the difference?

There has been a lot of talk about anti-retraction and anti-suckback features but little clarification about what they are and how they work” Mr Sleeman said.

Mr Sleeman further clarified that “Retraction is essentially related to water being pulled back into the system through the water lines. So, retraction is strictly related to fluids and debris within those fluids”

“Many manufacturers, including Morita, have already solved this problem by introducing anti-retraction valves throughout the system. One common type is called a duckbill valve which is held open by water pressure and clamps shut when the water stops which blocks any fluids from travelling back into the water lines. These can be present in your treatment unit and even in your handpiece or coupling. Usually, you will find multiple anti-retraction valves as fail-safes. Most major manufacturers, including Morita, include them within handpieces, couplings and the treatment unit. This technology has been around for a while and the ISO 7494-2 standard requires your treatment unit to include it” Mr Sleeman explained.

According to “Transmission routes of 2019-nCoV and controls in dental practice”, “high-speed dental handpieces without anti-retraction valves may aspirate and expel debris and fluids during the dental procedures. More importantly, the microbes, including bacteria and virus, may further contaminate the air and water tubes within the dental unit, and thus can potentially cause cross-infection.”

“Should retraction occur, you can still flush and disinfect your waterlines as needed, so we can say that the potential for cross-contamination here is relatively low” Mr Sleeman said.

What is drawback and can we eliminate it? Zero-Drawback is the solution.

When asked to explain what the term Zero-Drawback means (or zero-suckback as it is sometimes known), Mr Sleeman said, “Unlike retraction, drawback is related to the air lines. Aerosols, created during dental treatment, can be drawn back into the handpiece, your air lines and eventually into your treatment unit. When the drive air stops, the turbine continues to spin. This creates negative pressure in the system and begins to draw aerosols back into the system, kind of like a vacuum. This is also known as suck back. This effect is cumulative. Each time you activate the drive air, the draw back forces any contaminates further into the handpiece, past the coupling and eventually into your air lines and your treatment unit. Keep in mind that you cannot disinfect and flush the air or exhaust lines of your treatment unit. Many manufacturers will include a braking system to reduce the spinning motion of the turbine once the drive air stops. Terminology for these types of braking systems may vary but at Morita, we call it Quick Stop.”

“A quick stop braking system can help reduce draw back but not eliminate it. The turbine continues to rotate after the drive air stops and, like any braking system, we cannot force the turbine to stop instantaneously. It takes time and during that time, draw back is occurring. In addition, smaller handpiece head sizes create less inertial force which also contributes to reducing stopping times.” Mr Sleeman said.

Smaller head sizes or quick stop braking mechanisms will help stop the turbine faster and reduce the number of possible contaminants from being drawn back into the system. But reduction is not enough as the effect is cumulative, and even minor draw back can be pushed back into the exhaust lines and contaminate your system” Mr Sleeman emphasised.

According to “In vitro study of anti-suck-back ability by themselves on new high-speed air turbine handpieces”, some manufacturers will introduce a labyrinth system to reduce draw back, but these will not eliminate the drawback effect.

Only the Morita Zero-Drawback system was found to eliminate draw back through this study (reference below).

The Morita factory conducted direct comparisons between late model handpieces from each major global brand. The team was inspired by the methodology used by Toshiko OZAWA, Masako NAKANO, Takashi ARAI to conduct the “In vitro study of anti-suck-back ability by themselves on new high-speed air turbine handpieces” study.

For visual drawback comparisons, the factory staff used a sealed environment provided by a glass cylinder. A rubber stopper was used to create an airtight seal at the top of the cylinder so that the only way air could get out was through the handpiece itself. The whole handpiece head was observed and not just the front or back. This was important because drawback can occur anywhere on the handpiece head.

The vacuum, created by the air drawback effect, will pull water up through a centre tube. The stronger the drawback the higher the water will rise. 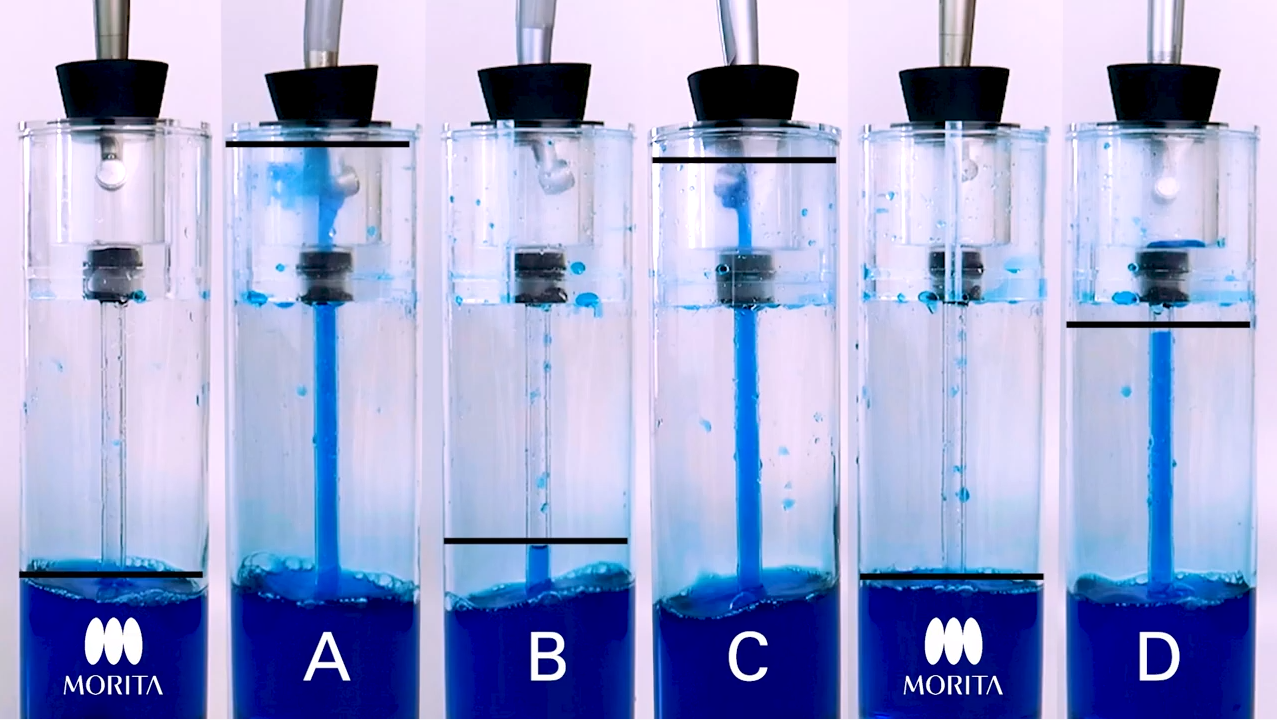 As the OZAWA, NAKANO, and ARAI study was conducted in 2010 (results reconfirmed by Quan, Yingjun & Lim, Joong-Yeon & Kim, Kyoung-Nam & Kim, Yang-Soo. (2015)), the Morita staff ran the comparisons with newer handpieces from top tier manufacturers to see if the claims still held true. The TwinPower Turbine handpiece was the only one to demonstrate a complete lack of negative pressure. Brand B performed well because of the presence of an effective braking mechanism but still showed slight drawback.

The TwinPower Turbine handpieces all performed with braking times under 2 seconds. The Morita standard head TwinPower Turbine had a stopping time of approximately 0.55 seconds which was the fastest time recorded in this comparison. Brand B in the image uses an effective braking system and was faster to stop than Morita’s High Torque model. Brand B also performed well in the draw back comparison but could not eliminate drawback completely. Brands A, C and D had significantly longer stopping times resulting in significant drawback.

In these times of heightened contamination concerns, it is reassuring to know that innovative handpiece engineering has made it possible to eliminate the drawback of aerosols into your handpieces, air lines and even your treatment unit.