The 11-year-old male patient came to our practice for an orthodontic consultation at the beginning of 2010. The clinical exam, amongst other things, revealed a distal movement of the front teeth in the upper jaw on the right as well as complete lack of space for tooth 15, which hadn’t erupted.
The X-ray diagnostics (OPG) revealed that it wasn’t tooth 15 but tooth 14 that was dislocated, and that tooth 15 had erupted. Since malpositioning and retention of upper second premolars occurs relatively frequently, we had assumed that tooth 15 was missing or malpositioned (Fig. 1).

The formulated therapy first planned to open a space regio 14 by means of a multi-bracket appliance. A short time after inserting the multi-bracket appliance, a distension occurred on the vestibular side in regio 15.  Thereupon an OPG X-ray (Fig. 2) was taken, which revealed that malpositioned tooth 14 was on the vestibular side of 15 – a rare occurrence. Thus, we asked ourselves how we could integrate tooth 14 as safely as possible, e.g. in regio 14, or if it would be better to integrate 14 between 16 and 15, i.e. 14 and 15 would switch places.

For this reason, I suggested to the parents that we take a CBCT, and they agreed.
The visualization as cross-section (section through the alveolar ridge) revealed that tooth 14 was directly on the vestibular side of 15; however, significantly further towards the skull (Fig. 3). 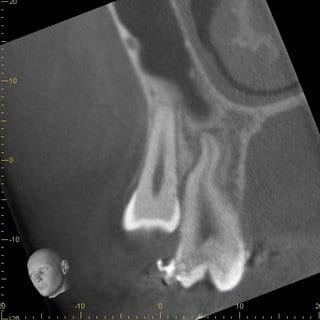 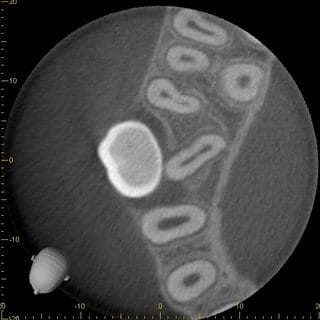 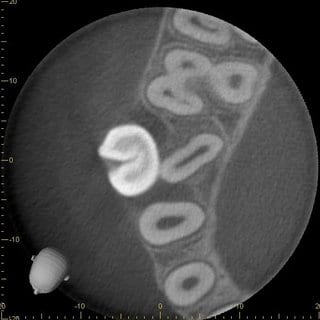 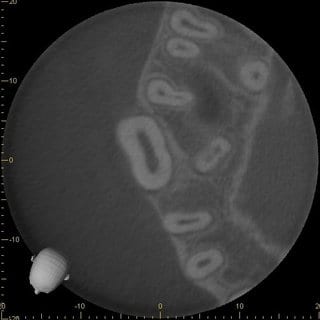 Opening a space with a multi-bracket appliance was unproblematic. The treatment caused the tooth to „slip“ into its space almost by itself. Soon the crown of 14 became visible, and we were able to attach a bracket and integrate the tooth in the dental arch.  In the meantime, the fixed appliance has been removed and the patient is in the retention phase.