For 2-3 weeks tooth 22 has shown labial pain on palpation and a small labial swelling in the apical region. At the time of the first consultation, there was no labial fistular opening. Tooth 22 was slightly sensitive to percussion axially and laterally; the probe depths were within physiological limits and not increased. Tooth 22 was not hypermobile. The sensitivity test to cold was reproducibly positive. Tooth 22 also responded positively to electric stimulus (Elements Diagnostic, Sybron Endo, Orange, USA). A trauma could be excluded with respect to the general anamnesis. In order to clarify the course of the invagination in the general area and planning the practical treatment, a CBCT was performed in addition to two-dimensional X-ray diagnostics.

Radiological:
Individual digital images: Soft tissue density, sharply delineated translucence at the distal and lateral side of the apex; enamel density, shadowing in the mesial area of the crown extending to the medium third of the root. Presumably dens in dente type III (Oehlers).

The treatment was conducted unilaterally.

The pre-operative CBCT scan showed clearly that the communication to the apical parodontium did not come from the deepest point of the invagination, but diverged distopalatally somewhat above. After measuring the distance from the incisal edge to the opening of communication and slightly expanding the primary access cavity, it was possible to insert a pre-bent hand instrument (size ISO 008) into the branch to the parodontium and to advance to the apical tip of the invagination under endometric control (RootZX von Morita).

After repeating the endometric measurement several times, the apical parts, which were clearly bent distopalatally, were prepared mechanically with pre-bent ProTaper hand instruments (S1- F2). After extensive ultrasound-supported irrigation with NaOCl 5%, EDTA 17%, and subsequent rinsing with 70% ethanol, the „canal“ was dried with sterile paper tips and the obturation was performed in a modified Schilder technique with AH26 and gutta-percha sealer. The coronal part of the obturation was performed with squirt technique.

After a radiological control exam, a quartz-fiber pin was inserted in the lower two thirds of the invagination. Then the dentin-adhesive obturation was completed with a dual-curing composite. The coronal part of the access cavity was sealed with a light-curing hybrid composite. The first clinical follow-up took place after one year. Tooth 22 showed no clinical symptoms. Radiological scans showed that the apical translucence was healing. However, it had not healed completely yet. In view of the expansion of the periapical lysis determined in the pre-operative CBCT, this could hardly have been expected (under certain circumstances, we may have to revise our ideas of radiologically certain healing with the advent of CBCT, or at least „adjust“ the time spans). Tooth 22 still responded reproducibly to cold and electric stimuli. 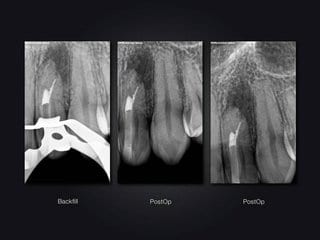 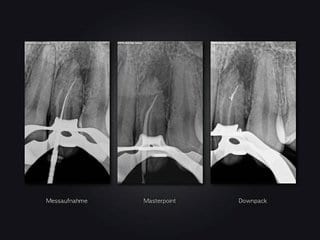 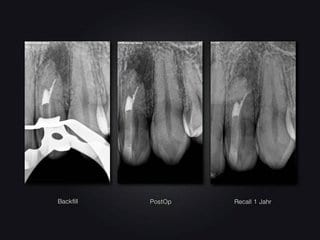 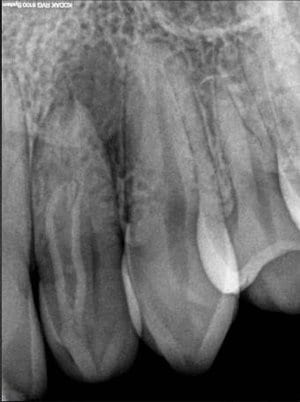 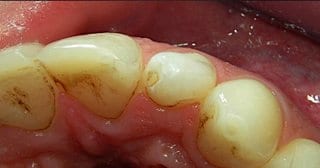 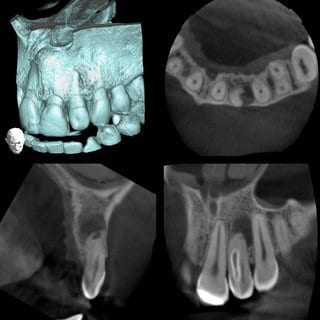 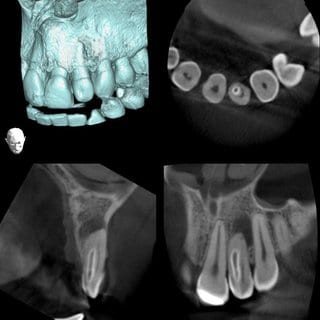 Invagination in mesiopalational position to the original canal 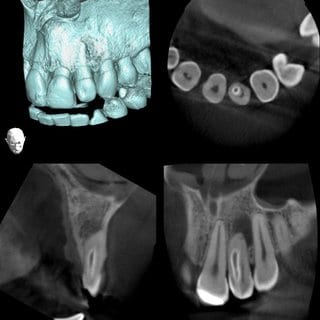 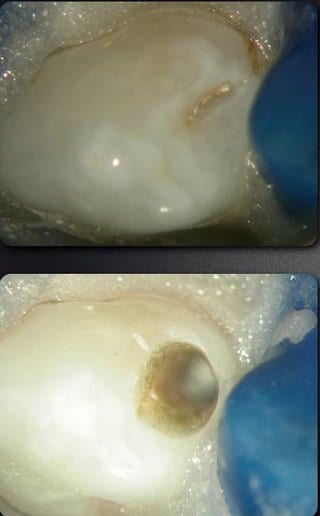 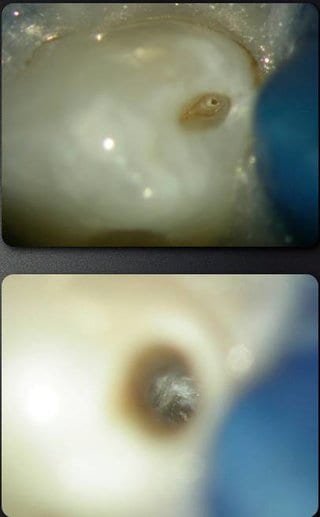 Lowest Point of the Invagination 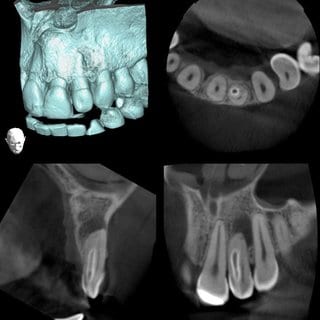 Please feel free to use our callback service free of charge.